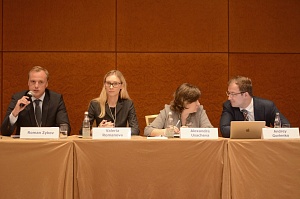 The American Bar Association's eight annual international conference held on 30th September at the Radisson Royal Hotel, Moscow addressed dispute resolution in the CIS countries as an alternative to protecting the interests of Russian and international companies

The Russian Arbitration Association was information partner at this event.


Among topics discussed at this year’s conference:

• Winning and Losing in The Court of Public Opinion: Lawyers, Business Disputes, and the Media from a Global Perspective
• Legislative Developments in Russian Arbitration
• Damages in International Arbitration: Latest Trends and Practical Tips
• The Effect of Economic Changes and Sanctions on CIS Business
• Foreign Sovereign Immunity: Testing the Strength of the Protective Shield

Members of RAA also participated as speakers at several other sessions: at the plenary session titled “Winning and Losing in The Court of Public Opinion: Lawyers, Business Disputes, and the Media From a Global Perspective”, Andrey Knyazev, Knyazev and Partners shared his experience with interacting with members of the media, as well as the media’s influence on corporate disputes, verdicts, public opinion and the legal practice as a whole, in Russia. Andrey Zelenin, Managing partner, Lidings and Alexey Sizov, KIAP both spoke at the session on administrative litigation, while Alexei Dudko, Hogan Lovells spoke at the session on uncovering fraud/asset tracing and recovery across borders. Dmitry Lysenko, Baker & McKenzie - CIS, Limited have a presentation at the session on Russian market exit-related disputes, while Maxim Kulkov, Kulkov Kolotilov & Partners spoke about international judicial assistance. Ilya Nikiforov, Deputy Chairman, RAA Board brought the conference to a close as moderator of the closing plenary titled “Fresh Off the Press! An Open Mike Debate About Hot Topics in Litigation and Arbitration”.

The International Chamber of Commerce, Russia section was the event’s organizational partner.

“Every year, the ABA conference offers the perfect platform to network and exchange experiences with representatives of leading international and national law firms. This year, focusing on Russia’s new arbitration legislation, the conference featured several extremely interesting sessions on the future of arbitration in Russia. We look forward to discussing the first fruits of Russia’s arbitration reform at next year’s conference.”   - comments Roman Zykov, Secretary General, RAA