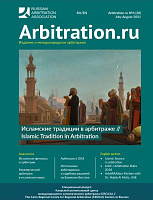 Where is the border between the West and the East? It is as hard to answer this question as to find the margin between morning and afternoon (especially in Moscow, where an Italian restaurant neighbors an Uzbek teahouse, a grocery chain that came from the Old World is next to a shop of Indian spices, the poverty of high-rise buildings on the outskirts contrasts with the luxury of downtown mansions, and freedom in choosing clothes contradicts the implanted conservatism of values). However, good lawyers cannot be frightened by paradoxes: finding answers to the most difficult questions of a client is their daily job. And philosophical, civilizational reflections turn into very practical ones when the task is to obtain and enforce an arbitral award in the countries of Muslim legal culture. There will be more such tasks in the coming years as Russia (as well as other countries) is seeking strategic partners in the East. Today Russia is building the El-Dabaa nuclear power plant in Egypt. The contract stipulates not only the construction of a nuclear power plant by the Russian side, but also training of the power plant personnel, the supply of Russian nuclear fuel, alongside with the construction of a nuclear waste repository. Meanwhile, also in Egypt, Russia is engaged with the development of "Ain Sokhna" and "Port Said" industrial zones. And last year, financial funds from the Middle East became key investors in shares of Aeroflot, which were rapidly going down amid the pandemic. It is also notable that in 2020, the Russian governmental think-tank Institute of World Economy and International Relations (IMEMO RAN) published the book “The Middle East: Politics and Identity”. According to its authors, the relationship between the players from the former USSR countries and the Middle East is distinguished not only by growing geopolitical interest, but also by the turbulence inherent to the southern region. Its forms vary. In early 2021, the world witnessed the Ever Given container vessel accident in the Suez Canal. This fall, the events in Afghanistan will affect contracts not only in the Middle East, but even further, in India and Southeast Asia. Not only force majeure can give rise to questions when running business in countries of Islamic legal culture. Can one claim interest for a delay in performance of the contract? Will a loan agreement be recognized as valid? Is it possible to appoint a non-Muslim arbitrator in a dispute between two Muslim parties? The opinions of practicing lawyers on these and other problems published in the new issue of our journal will help to find the answers.