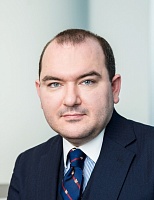 Stepan Guzey is a Partner in Lidings’ Dispute Resolution practice and Head of the Tax & Customs practice and Bankruptcy and Restructuring practice in the firm’s Moscow office.

He is a highly qualified litigator with more than a decade of experience as a trial attorney in accordance with the rules of the ICAC with the Chamber of Commerce and Industry of the Russian Federation, as well as other Russian and international arbitration institutions. His expertise spans high profile restructuring, bankruptcy and insolvency cases, as well as corporate disputes.

He is also skilled in advising on assets and share capital deals with emphasis on tax treaties, cross-border taxation, transfer pricing, general corporate financing, and tax disputes. Stepan has significant experience in advising companies of the Asia-Pacific region and Europe.

Among others, Stepan has represented:

Under Stepan’s lead Lidings is handling the largest individual bankruptcy case in European history (Seán Quinn vs. Irish Bank Resolution Corporation). This transnational bankruptcy project resulted in the formulation and application of practices that currently represent precedent-setting principles – not only in terms of insolvency cases, but also with respect to corporate disputes and matters involving the official recognition and enforcement of foreign court decisions in the Russian Federation.

In 2014 Stepan has been elected for a two-year term to represent Russia as a member of the Regional Coordinating Committee for the Young Arbitrators Forum of the International Chamber of Commerce. He is the author of multiple publications and is frequently invited to act as expert and speaker at key events of the professional legal community in Russia and abroad.