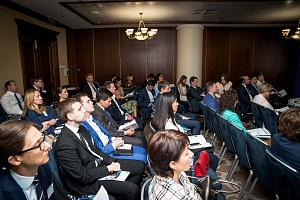 Konstantin Kroll, partner, head of Russia and the CIS desk at Orrick, presented to the audience such a relatively new phenomenon as judicial inquiries about the origin of capital (Unexplained Wealth Orders, UWOs) in the UK. He spoke about the departments that are entitled to demand from British courts to make such requests, and their possible addressees, which can be not only individuals, but also, for example, trusts. Responding to questions from the floor, Krol said that inquiries about the origin of capital can be sent at the initiative of foreign lenders if they turn to law enforcement agencies in the UK. The speaker also paid attention to requests for freezing assets (Freezing Orders), as well as the practice of British banks to freeze funds on an account if there are doubts about the origin of funds. The above tools can significantly harm the interests of the debtor; However, if the debtor’s funds are frozen on the initiative of a foreign creditor, it does not mean that eventually the lender, and not the state, will receive them, said the lawyer.

Wilson Antoon, Counsel, King & Wood Mallesons, gave a presentation on how the London courts today support international investigations into cases of fraud, and described the arsenal of tools available to both the judicial and executive bodies of the Kingdom and the lawyers who apply to them. He also stressed that competition between law firms in London is very high due to high market saturation.

Steven Philippsohn, Partner, PCB Litigation, dwelled on the theme started by the previous speaker and talked about tools such as the Worldwide Freezing order request and the difficulties involved in convincing the court to take such procedural measures. Explaining the purpose ofsuch procedural actions, the speaker cited a case when the debtor employed about 40 (!) vehicles scattered around the world to conceal his assets. Phillippsohn also spoke about requests for a search in the defendant’s territory, including copying data from computer equipment.

Daria Konstantinova, partner at Zabeyda & Partners, dedicated her speech to set-up criminal cases in the arbitration process and their signs. She pointed out that such a fradulently set-up case can be identifed by far-fetched circumstances, which would mark a possible crime only indirectly, as well as a requirement for a total check of the economic activities of a legal entity. In this case, a criminal case is initiated, as a rule, against a specific person, what the state investigators usually do reluctantly as it presents certain difficulties for the investigator in connection with a possible termination of the proceedings. In addition, the criminal case is initiated not at the place where the crime has been committed, but where the “customer” has its own resource. To protect oneself frim such set-up proceedings, it is important to prove the absence of intent to theft of property, which plays an important role in distinguishing between civil law and criminal liability, the speaker said. In conclusion, Konstantinova drew the attention of the floor to the fact that in Russian lawyers without attorney status cannot refuse to give evidence in a criminal case.

Michael Fenn, partner at Pinsent Masons, opened the second session called “I have a Claim! ... or I have a Dream?”, presenting the litigation financing magazine Litigation Funding. Fenn spoke about litigation insurance and its subspecies - before / after the event insurance (BTE / ATE). The speaker focused on different financing models (conditional fee agreements and damages based agreements, CFA and DBA). Third party funding is not universally available and depends on jurisdiction, he noted. For example, in Ireland in Ireland it is considered as champertous. Only recently it was introduced in Singapore and Hong Kong. Pinsent Masons frequently enter into fixed fee agreements, he noted.

Maxim Karpov, director and managing partner of NLF Group, spoke about key trends in the Russian TPF market. To invest in a case, funders need a good judicial position and a high probability of a subsequent recovery. Karpov noted that requests for a comprehensive solution to the problem by a court investor are popular now, like managing the company's bankruptcy procedure and subsequent recovery of the debt. In addition, legal investors may be involved in financing disputes that do not have direct monetary value, and in financing claims and searching for assets in foreign jurisdictions. The lawyer also noted the fact that the disclosure of cooperation with third party funders is not provided for by Russian legislation.

Alexander Stefanovsky, partner at Platforma, stressed that court financing services are also required for Russian clients who are starting an argument with Western companies. Even large companies have only a vague idea of ​​the amount of legal costs that canincur abroad. According to the speaker, these costs are difficult to predict, as well as the timing of cases. Those large companies that do not want to withdraw money from circulation also apply to court financing, noted Stefanovsky. If the claimant’s lawsuit is prepared to be financed by a large legal investor, the defendant is convinced of the claimant’s strong position and is more willing to compromise.

Lee Drucker, co-founder of Lake Whillans Litigation Finance LLC, talked about legal claimsas an economic asset. He showed calculations that allow us to estimate the prospect of investing in a legal process compared to investing money in a company. He also presented the audience with a graph, which clearly showed the distribution of the probability of success of investments depending on the number of cases in the portfolio of the court investor.

Michael Fenn then noted that where funders funded and controlled the proceedings, they would ordinarily be liable for them.. In this context, he mentioned the so-called Arkin cap. The speaker then cited the example of Essar Oilfield Services Ltd v Norscot Rig Management PVT Limited (2016), in which the plaintiff behaved so aggressively from an arbitrator’s point of view that the arbitrator awarded the successful respondent to recover litigation investment sums from the plaintiff. In addition, the speaker mentioned an example of a case with a multiplicity of judicial investors (nine) - Excalibur Ventures LLC in Texas Keystone Inc & Others (2016), and Hellas Telecommunications (2017), where the party was required to disclose its legal investor. He mentioned the case where a court investor financed a class action lawsuit - Sandra Bailey & Others v GlaxoSmithKline UK.

Moderator of the third session“Show me the Money! Asset Tracing: What is it? ” Alex Volcic, Managing Director and Head of the Investigation Practice in Russia and the CIS, Kroll, presented the panelists, spoke about their experience in the legal and financial sphere. The speaker dwelt on the fact that now computer programs play a huge role in the search for assets of unscrupulous debtors, and finding the right software is already largely a guarantee of success. He discussed with the panelists the possibilities and limitations of the use of lie detectors and non-verbal signals in asset tracing.

Mike LaCorte, director of Conflict International, chairman of the International Association of Detectives, noted that investigations require a coordinated approach and early intervention if possible. He also spoke about the search for debtors and their property in public rosters, professional organizations and briefly focused on how to search for companies in offshore jurisdictions. He touched upon databases of legal precedents for the search of certain persons and programs that allow to store and organize the information found. LaCorte explained how the field agents are used in search for assets.

Denis Vinokurov, Deputy Managing Director, Kroll, noted that before starting a big dispute, the company should take into account the cost of the trial will be. The speaker briefed on working with offshore trusts, as well as on attracting real witnesses to investigations.

Alina Sokolova, partner of Deloitte CIS Forensic, spoke about the analysis of documents and electronic correspondence in investigations. According to her, special attention should be paid to private computers, laptops and mobile phones of employees. The speaker also highlighted the issues of proper preparation for witness examination.

Anton Maltsev, partner of Baker McKenzie, made a presentation on “How to kill an arbitration decision, or the Dead Hand of Bankruptcy in Arbitration Proceedings”. What to do if the debtor’s past bankruptcy affects the award? In response to his question, Maltsev addressed the dispute between Inzhtransstroy and Dredging & Maritime Management companies, which reached the Supreme Court of the Russian Federation. Analyzing the key stages in the development of the dispute, the speaker drew attention to the negative consequences of stopping the bankruptcy procedure and concluding a settlement agreement.

Alexander Pisemsky, managing director of the CSI Group, described the life cycle of a problematic asset. The speaker spoke about how debtors usually act, anticipating the bankruptcy of their enterprise, and the related tasks of companies that search for assets. When searching, usually no more than 30% of the available information is analyzed, noted Pisemsky. At the same time, the total amount of data in large corporations and banks is enormous, and the task of information search agencies is to find useful instructions in this volume of data.

Georgy Marinichev, a partner at Morgan Lewis, spoke about protection of creditors in common law jurisdictions. He paid particular attiention to offshore ones, such as Cyprus and the British Virgin Islands. Marinichev described the types of trusts, which, arise out of circumstances (and not out of contract) according to English law, and special types of claims - proprietary claims. The speaker drew attention to the difficulties in disputes about the establishment of jurisdiction in common law countries.

Georgy Murvanidze, Advisor to the Derzhava Bank, drew the attention of the audience to the problems of cross-border bankruptcy Russia / USA. He noted that most of the cases on this issue are dealt with by a specific American court on Wall Street (Southern District), whose judges pay great attention to their political reputation, and cited several related nuances of filing cases with this court. The speaker focused on the nuances of the search for the debtor and his funds in the United States, in particular by social security number, and the provision of U.S. Code Section 1782, Discovery, which allows to track money transfers through correspondent banks in the United States.

Nikolay Pokryshkin, partner of the Kulkov, Kolotilov and Partners, spoke about the methods of recovery through bankruptcy in the Russian Federation or through foreign jurisdiction, as well as the associated risk groups. In particular, the speaker pointed out that it is almost impossible to force an arbitration manager to look for foreign assets against his will, since such a duty is not fixed by law. Pokryshkin also mentioned the Gibbs principle, which determines the immunity of another jurisdiction from the procedural consequences of bankruptcy in other countries, and its application in various countries. The lawyer noted the risks associated with claims for the recovery of unjust enrichment under Art. 23 of EU Regulation No. 2015/848. He also shared a methodology for estimating the averaged amount of recovery and presented a mathematical formula developed by him for this. The speaker advised to pay attention to the bankruptcy case of Georgy Bedzhamov, ex-co-owner of Vneshprombank, which was the next big bankruptcy after the decision on insolvency of Vladimir Kekhman, the owner of the JFC group that had imported bananas to Russia.