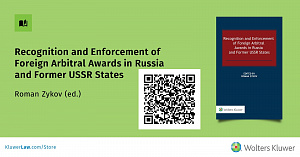 Recognition and Enforcement of Foreign Arbitral Awards in Russia and Former USSR States is the first full-scale commentary in English that aims at analysing the application of the New York Convention in Russia. The Convention introduced a straightforward model for the recognition and enforcement of foreign arbitral awards, which has had a unifying global effect, and created homogeneous national legal regimes in the field of commercial law. The 15 sovereign states that emerged from the dissolution of the Union of Soviet Socialist Republics (USSR) in 1991, all having adopted the New York Convention on the Recognition and Enforcement of Foreign Arbitral Awards, today are drawing increasing attention from international law firms and global arbitral institutions. This book is compiled under the editorship of the Secretary General of the Russian Arbitration Association with attention to various relevant national laws and procedures.

What’s in this book:

The analysis of the law and practice of the former USSR republics is given in the form of country reports by the leading arbitration specialists from these states. A total of 71 contributors, all leading experts on arbitration and litigation in the covered jurisdictions, provide in-depth research encompassing the following approaches:

The results of the study will assist the companies in deploying a more effective contract risk assessment strategy and therefore save their resources at the contract implementation stage.

How this will help you:

The recognition and enforcement of foreign arbitral awards in Russia is frequently in the focus of international law firms, third-party financers and users. As an exhaustive authority about the New York Convention in the former USSR, this book will be warmly welcomed by in-house counsel, arbitrators, arbitral institutes, judges, researchers, academics and other legal professionals focused on international arbitration. With the detailed information that the book provides, practitioners will be able to understand how judicial developments in the covered jurisdictions have impacted the enforceability of arbitral awards, and how parties can take steps to ensure that they secure enforceable awards.