A Book on Online Arbitration in Theory and in Practice 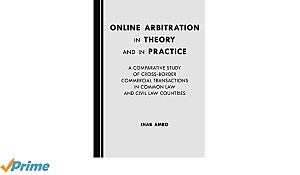 Online Arbitration, also known as e-arbitration, is a major component of Online Dispute Resolution (“ODR”) in which parties can also avail themselves of the provisions of international commercial arbitration such as the UNCITRAL Model Law on International Commercial Arbitration of 1985 as Amended in 2006, and the New York Convention on the Recognition and Enforcement of Foreign Arbitral Awards of 1958 (“The NYC”). In theory, this book deals with salient issues of online arbitration as an ODR technique for solving both traditional and e-commerce disputes that may arise out of the breach of contractual obligations in international commercial contracts, especially e-commerce contracts. In practice, this book examines how national courts apply both national laws and the NYC when dealing with the enforcement of e-arbitration agreements and e-arbitral awards, and whether courts apply the provisions of national laws of arbitration liberally.

This book provides an in-depth analysis of how international arbitration institutions deal with online filing of cases, online notifications, and online hearings. On this matter, this book indicates that the Russian Arbitration Association (“RAA”) has created an online arbitration system for facilitating the resolution of commercial disputes arising out of contractual and non-contractual transactions through means of technology. The RAA administers online arbitrations under its own online arbitration rules of 2015 (“The RAA Online Rules”).


Dr Ihab Amro is an Assistant Professor of Private Law and a practicing lawyer and a chartered arbitrator. He received his PhD from the Athens Law School, Greece, in 2011. He has published several books in both Arabic and English, including a book on the recognition and enforcement of foreign arbitral awards which has been included in the Bibliography of 1958 New York Convention Guide of the United Nations Commission on International Trade Law UNCITRAL. He has also published articles in several international law journals, including the Hague Yearbook of International Law, the Arbitration Journal of the Chartered Institute of Arbitrators, and the Slovenian Arbitration Review, among others. He is a member of several international arbitration organisations, including the Association of Attenders and Alumni of The Hague Academy of International Law, the ICC Young Arbitrators Forum, and the Moot Alumni Association. His current research focuses mainly on international commercial arbitration and online dispute resolution.

Online Arbitration in Theory and in Practice 1st Edition