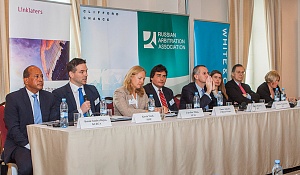 On 20th April, 2017 was helf the conference, the IV RAA Annual Conference and Member Meeting was held at the Marriott Hotel in Moscow.

The conference began with a  plenary session, "Arbitration reform: is it time to pick up the rocks? Views of leading international arbitration institutions on arbitration reform and the registration process in Russia". The session was moderated by Timur Aitkulov, Partner, Clifford Chance.

The first speaker was Datuk Sundra Rajoo, Director, KLRCA (Kuala Lumpur Regional Center for Arbitration). He stressed out that there are more than 50 diplomatic agreements between Russia and Malaysia, and KLRCA was interested in further interaction with Russia and russian companies, also in view of the proximity of countries such as India and China to the region, the Kuala Lumpur Regional Arbitration Center is able to resolve disputes with the parties from Russia on the one hand and India or China on the other, providing the possibility of a neutral dispute settlement place. The Decisions on arbitration disputes KLRCA could be brought into force in China and India, and also in all countries of the New York Convention.

Mr. Datuk Sundra Rajoo confirmed that the Kuala Lumpur Regional Arbitration Center had filed for the registration of the PDAU (permanent court of arbitration) all the documents, and the documents were in the process of being reviewed by the Russian Ministry of Justice at that moment.

The second speaker was Kevin Nash, Deputy Registrar & Centre Director, Singapore International Arbitration Centre (SIAC). The speaker underlined the importance and the priority of Russia in trade and cooperation with Singapore, that SIAC considered arbitration processes involving the Russian parties. SIAC valued its reputation and respect for the principle of independence. Since 2006, more than 307 disputes have been dealt with, and in 2016 there were two disputes with Russian parties. On the issue of registration as PDAU, Kevin told that the question was in the process of being discussed, and the decision would be taken before November 2017. 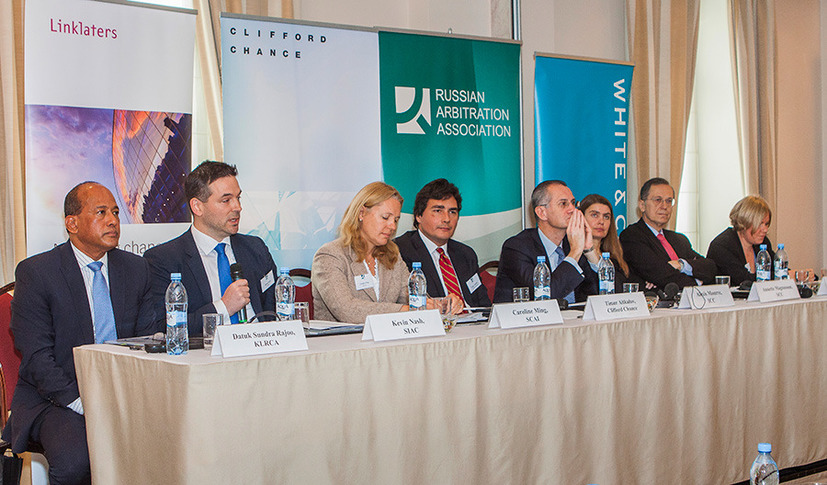 The third speaker was Caroline Ming, Executive Director & General Counsel, Swiss Chambers' Arbitration Institution (SCAI). Carolyn also expressed the position that Russia and the arbitration with the Russian parties were an important segment of the SCIA. Last year there were 7 cases involving Russian companies, and it is not known how many companies had included and was including an arbitration clause at the regional dispite settlement in SCIA. On the issue of registration of PDAU in the Russian Federation, Carolyn replied that the registration procedure in the Ministry of Justice Russian Federation was complex and had many documentation requirements, so that SCIA was in the decision-making process at that moment but had not yet finalized a position on the matter.  Carolyn suggested that excessive regulation of international arbitration by a State is not a contributing factor in strengthening the position of international arbitration in the world, that, probably, the most acceptable way of such registration as an arbitration institution may be the registration process in an international body rather than registration within a single state.

The third speaker of the first session was Alexis Mourre, President, International Court of Arbitration, International Chamber of Commerce (ICC). The speaker stressed that the ICC was a global arbitration institution and that its work was held throughout the world. More than 600 cases were at that moment considered in th court, and more than 50 court cases of them involving the Russian parties. Alexis stated that Russia was not the safest place because of the danger of the possibility of state intervention in the dispute settlement area. Alexis suggested that registration of PDAU in the Russian Federation for international institutions introduced the uncertainty for these institutions, and any ambiguity is not a good principle for arbitration as a whole. ICC has not submitted the documents for registration and will see how the situation in Russia will evolve in the future in this case.

The fifth speaker was Annette Magnusson, Secretary General, Stockholm Chamber of Commerce (SCC). Annette stressed out that SCC was trying to follow the principle of predictability and was trying to meet the requirements and needs of the business. More than 200 cases are reviewed each year and 50% of the cases including the Russian parties, and there is also a large percentage of investment cases in the SCC. Annette expressed the position that the registration of PDAU in the Russian Federation for foreign arbitration institutions undermined the principle of neutrality in international arbitration, which should be guided solely by international principles on the matter, that the decision to register was in the process of deciding whether to file or not to file for registration.

The sixth speaker of the first session was Dr. Manfred Heider, Secretary General, Vienna International Arbitral Centre (VIAC). Mr. Manfred said that 10% of the total number of the cases were cases of the Russian parties. Last year there were considered nine cases involving Russian parties were considered. The big sector was the mediation services, the largest case of mediation was with the Russian side, which was successfully considered with the participation of the VIAC. VIAC decided to apply for registration in Ministry of Justice as PDAU, VIAC is part of the Austrian Chamber of Commerce, the Ministry of Justice of the Russian Federation demands the confirming documents for VIAC from the Austrian Chamber of Commerce, and the registration was in process at that moment. 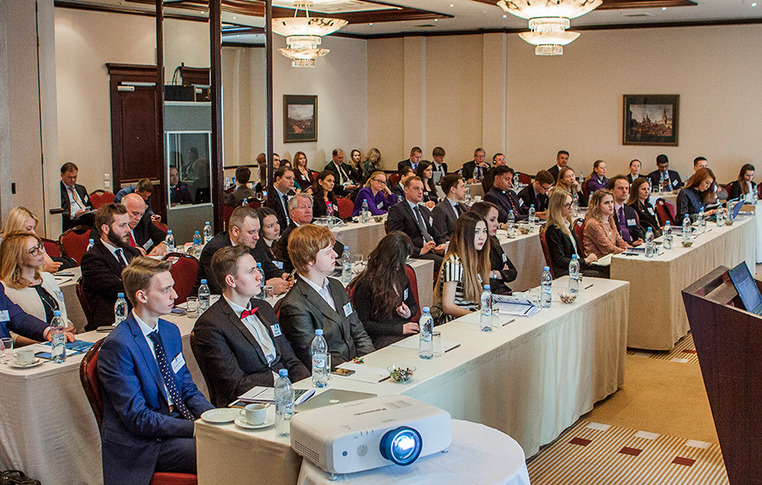 Timur Aitkulov, Partner, Clifford Chance, moderator of the session, stressed out that the registration of PDAU was aimed at contention with the "pocket courts" in Russia and at raising the quality of arbitral proceedings in the Russian Federation. However, in fact, the procedure is imperfect and this discussion has a positive effect on the exchange of the views and the positions and on the development of arbitration in the Russian Federation.

The first session was devoted to the following question: "Creeping Americanization of international arbitration: is it the right time to develop inquisitorial rules of evidence?"

The first bunch of speakers expressed the position for the americanization of international arbitration, Vladimir Khvalei, Partner, Baker McKenzie; RAA's Chairman of Board, and Alexander Khrapoutski, Partner, Sysouev, Bondar, Khrapoutski and partners.

Vladimir Khvalei, Partner, Baker McKenzie, in his presentation showed the prevalence in the world the countries with the precedent law, as opposed to countries belonging to the continental law.

In the countries of the continental law system, it is possible for the parties to provide an unlimited amount of evidence in the arbitration process, which overloads the process and the time consideration of the disputes. There is a necessity to limit the process of producing the documents and the time-limit of the submission of the documents and the evidence to the process. Vladimir explained that there were the "Prague Rules of the Evidence" in the development and that moment, which revealed the principles to avoid the consequences described above and other consequences that adversely affect the process. 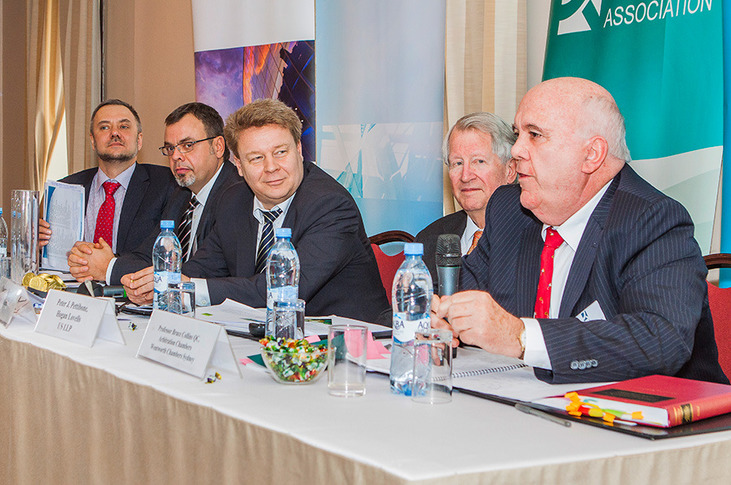 Alexander Khrapoutski, Partner, Sysouev, Bondar, Khrapoutski and partners, gave the examples and the statistics on the process of arbitration on the issue of submitting of expert opinions and evidence in countries, and stressed out the importance of the active role of the arbitral tribunal, emphasized that there were no restrictions in Russia and in the Republic of Belarus on the number of witnesses, which also delays the process of judgment.

The second bunch of the speakers opposed the americanization of international arbitration, the first speaker in the bunch, Peter J. Pettibone, Retired Partner, Hogan Lovells US LLP, stressed out that the possibility of providing evidence was the basis of the principle of party autonomy, which gave the equal opportunities to the parties in the process. The inquisitorial process is more likely to produce such judgments of the arbitral tribunal that will be more capable of being enforced. The speaker also stated that the predominance of the Tribunal might risk a violation of the principle of impartiality. The speaker said that the best approach would be to combine the two approaches. 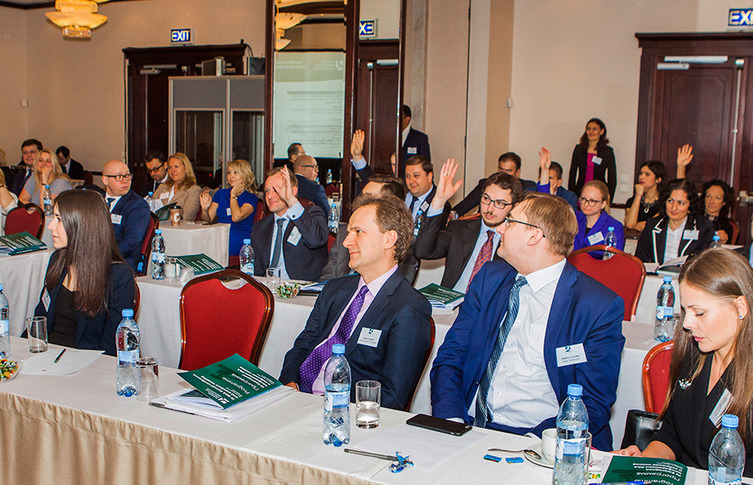 Professor Bruce Collins QC, Arbitration Chambers, London and Hong Kong, underlined that the evidence should be provided orally, that this form provided an opportunity to defend the position, that there could be no additional evidence, that all evidence in the proceedings should be considered by the arbitral tribunal.

The second session was devoted to the question: "Landmark Russian arbitration cases of 2016" the moderator was Artem Doudko, Counsel, White & Case.

The first question of the session was "Arbitration and bankruptcy: the boundaries of non-interference" was covered by Stepan Guzey, Partner, Lidings, Stepan gave the examples of interference by state courts in the bankruptcy process and the abolition of arbitral tribunals. The speaker pointed out that the rules of the bankruptcy legislation were of a super-imperative nature, which often disregarded the arbitral proceedings or even the arbitral award in such proceedings. 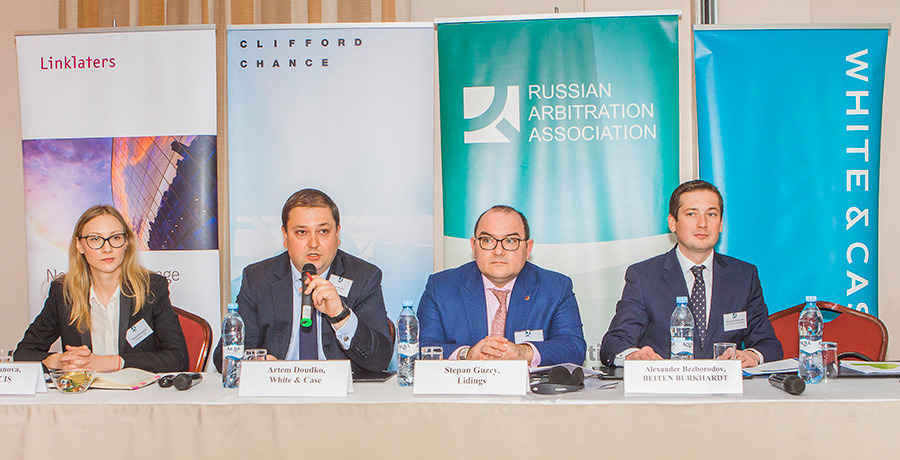 The  third question of the conference was covered by Valeria Romanova, Managing Associate, Attorney-at-Law, Linklaters, Valeria shared the experience of the Linklaters in the award of arbitration clauses, provided practical advice, and gave examples of the case law in the high-profile cases in 2016.

The third session "Debates. Women in arbitration: “A chicken is not a bird, Poland is not abroad, a woman is not an arbitrator? Do we need a special treatment for female arbitrators?" The moderator was Anna Grishchenkova, Partner, KIAP. Anna shared the information that there was a research about women arbitrators, and that the study was still in progress, that it was possible to participate in the research on the company's website. 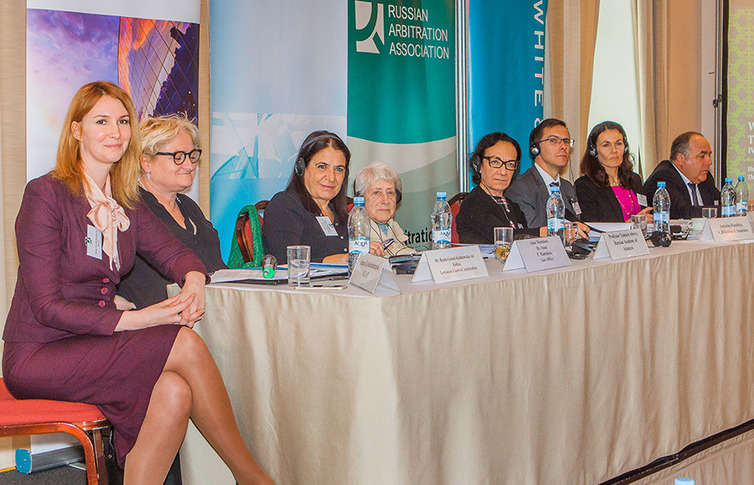 The second speaker was Nicholas Peacock, Partner, Herbert Smith Freehills, expressed the view that that the principle of equality should be respected in the matter of this question, and the speaker referred to the investment arbitration statistics, that 50 arbitrators decided 80% of the cases, that there were not enough women arbitrators at that moment.

The third speaker was Antonias Dimolitsa, Founding partner, A. Dimolitsa & Associates, the speaker described her experience as an arbitrator in the appointment processes and that the gender stereotypes should not prevent talented women from international arbitration.

The forth speaker  was Anna Mantakou, Managing partner, Dr. Anna P. Mantakou Law Office, Anna stressed out the importance of observing the principle of equality, and that there was no need for special treatment of women arbitrators. Anna also said that 50% of arbitration was ad hoc, and the appointment of women as arbitrators was constantly increasing.

The speaker was Prof. Ivan Zykin, Vice-President of the International Commercial Arbitration Court at the Russian Chamber of Commerce.  The speaker gave the statistics on Russia that 45% of women leaders in the world, where there is 24% of women-leaders, were 25% of women arbitrators in the new ICAC list of arbitrators  ICAC. The main factors are professionalism in choosing an arbitrator.

Heidi Merikalla-Teir, Secretary General, The Arbitration Institute of the Finland Chamber of Commerce and Tamara Abova, Chief of the civil law and civil procedure Department, Professor, Honoured researcher, Institute of State and Law RAS were invited as experts of the Panel.

The final step was an Open Meeting of RAA members where non-members of the RAA could participate in the work of the meeting. 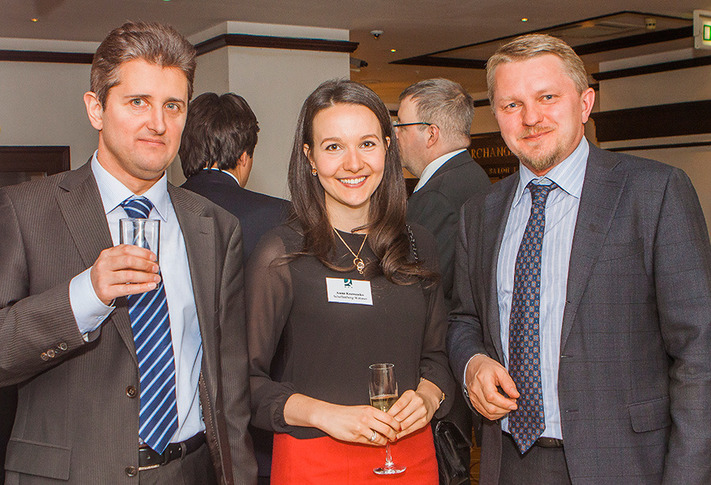 The event ended with the reception and interaction between representatives of the legal community of different countries and companies.

Follow the link for the full photoreport of the event: https://yadi.sk/d/WTzmGle93HN2AL/_mg_3296.jpg