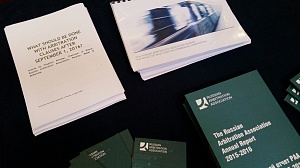 From 14th to 16th of November 2016 there was held the regular Russian Law Week in London. The event was organized by The Law Society of England and Wales.

The RAA served as one of the main media partners.

The conference gathered together the leading legal practitioners of Russia and the United Kingdom, as well as business representatives.

Among the key speakers, there were the members of the RAA, who covered a number of urgent issues related to the arbitration practice in Russia.

Oksana Gogunskaya, EPAM (firm-member of the RAA) gave a presentation at the first session devoted to the policy of import by telling the participants about the impact of the current situation on the legal markest from the viewpoint of foreign investment, financial decisions, taxation. The impact of this policy on the pharmaceutical industry in Russia was covered in more details.

An Executive Partner at Lidings law-firm (firm-member of the RAA) Andrey Zelenin was moderating the second session on the latest modifications and current trends in the Russian judicial system.

The third session was dedicated to the new Arbitration Act. Among the experts there were also the RAA members: An Executive Partner of "Kulkov, Kolotikov and partners" law firm Maxim Kulkov, Sergey Usoskin, Double Bridge Law, and Evgeniya Rubinina, Freshfields Bruckhaus Deringer LLP. In their reports, they described the ongoing reform of the arbitration courts, the consequence of the enaction of the New Arbitration Act in terms of arbitrability of corporate disputes. The question of financial arbitration and its application in Russia and the CIS was also considered.

Andrey Panov, Norton Rose Fullbright (firm-member of the RAA), presented at the forth session, discussing, together with other present experts, other noticeable events in the field of arbitration in Russia.

The following days of the Russian Law Week were devoted to the topics related to bankruptcy, deoffshorization and changes in Russian corporate law.