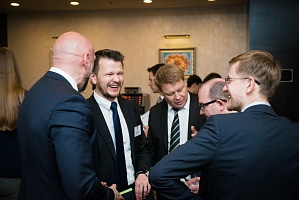 Mikhail Galperin, Deputy Minister of Justice of Russia, held a welcoming speech devoted to arbitration reform results as well as forthcoming amendments in arbitration legislation, which were submitted recently by Ministry of Justice to the Russian Government.

Gleb Sevastyanov, Chief editor, journal “Arbitration Court”, told the audience about the problems arising from registration for PAI procedure that were faced by regional arbitration institutions.

Alexander Komarov, Member of Presidium, ICAC at the RF CCI, shared his opinion on arbitration reform: “One step forward -  two steps back” and underlined that international arbitration development should be based on international standards.

Mikhail Savranskiy, Vice-President of the Arbitration Center at the Russian Union of Industrialists and Entrepreneurs, devoted his speech to the work of arbitration institutions before and after the arbitration reform.

Alexei Dudko, Partner, Hogan Lovells spoke about the issues arising from arbitration institutions registration and touched upon the topic of ad hoc.

The first speaker, Kaj Hober, Chairman, SCC Board (Sweden), told participants about the SCC Rules for Expedited Arbitration. As for the Russian reform, he added that there are few corporate cases involving Russian parties, so the SCC did not consider yet obtaining permission from the Russian government to administer disputes.

Joe Liu, Managing Counsel, HKIAC (China), told the audience about proposed amendments to the 2013 HKIAC Administered Arbitration Rules, among which are multilingual procedures, concurrent proceedings. Concerning the Russian arbitration reform HKIAC remains neutral and had not decided yet whether it should apply for the permission for PAI or not.

Alice Fremuth-Wolf, Secretary General, VIAC (Austria), spoke about the new version of the VIAC Rules of Arbitration and Mediation has entered into force on 1 January 2018. The Secretary General touched upon the topic of problems arising from the obtainment of permission for PAI from Russian Government by international arbitration institution, mainly the necessity to establish Russian branch and tax issues associated with it.

Caroline Ming, Executive Director & General Counsel, Swiss Chambers’ Arbitration Institution (Switzerland), whilst speaking about the Swiss Rules of International Arbitration and domestic policy underlined that since 2004 when several Swiss Chambers of Commerce and Industry harmonised their arbitration rules and adopted the Swiss Rules, the focus was mainly on stability. In her opinion, Russia might consider how many reforms were deemed to be necessary to have and how costly it could be.

Vladimir Melnikov, Partner, Linklaters spoke about the tendency of restrictions of resolving some types of corporate disputes outside of Russia, problems arising from shareholders agreements deliberations, the necessity to have multilevel arbitration clauses. In his opinion the Russian reform led to legal uncertainty.

Ziva Filipic, Managing Counsel, ICC Court (France), devoted her speech to positive tendencies in 2017, in particular, the success of the expedited procedure (63 applications for expedited procedure), the increase of women appointments as wells as the transparency (the ICC started to publish the names of the Tribunal members). In addition, the ICC`s representative provided statistics on disputes involving Russian parties for 2017 (28 cases with Russian parties, 53 pending cases). In her opinion, the arbitration reform did not impact much the ICC`s case statistic. Moreover, there was only one case, in 2016, where the Russian Federation was chosen as a place for arbitration. Hence the ICC did not consider applying for the permission yet since it did not see the benefits of registration.

Brad Wang, Managing Counsel, CIETAC Hong Kong Arbitration Center (China), told the audience that CIETAC resolved disputes arising from economic and trade transactions of contractual or non-contractual nature, including international or foreign-related disputes; disputes related to the Hong Kong SAR, the Macao SAR and the Taiwan region; and domestic disputes. In addition, in 2017 was established the new CIETC branch, CIETAC Hong Kong Arbitration Center. He underlined that CIETAC administered disputes from 50 countries and there were only 4 cases involving Russian parties for the past 3 years.

The third session was devoted to the topic “The Prague Rules on the Taking of Evidence: Is it an alternative to the IBA Rules?”, the moderators Alexandre Khrapoutski, Advocate, Sysouev, Bondar, Khrapoutski, and Vladimir Khvalei, Partner, Baker McKenzie, suggested to hold the session in the form of a life discussion on the following topics: Prague Rules, Active roles of the Tribunal, Disclosure under IBA Rules of the Taking Evidence, Witnesses of facts, Expert witness.

At the beginning Alexandre Khrapoutski briefed the audience about results of survey on evidence conducted by the Arbitration Association, where the respondents from 30 countries took part in. The main purpose of the Survey was to research whether the main ideas of the Prague Rules are applicable in different civil law countries. The focus of the survey was on the following topics: active role of tribunal in fact finding, the right of the tribunal to appoint an expert on its own motion, limited use of fact witnesses (witnesses may be called only with the permission of the arbitral tribunal).

Christoph Liebscher, Lawyer, Arbitrator, LIEBSCHER DISPUTE MANAGEMENT, hold a speech in support of the inquisitorial process and spoke mainly on the active role of the tribunal, efficient case management, importance of preparation for the case by the tribunal as well as holding the process in the manner that meets the expectations of the parties.

Dr. Beata Gessel-Kalinowska vel Kalisz, Managing partner, GESSE, spoke also in support of the Prague Rules and the inquisitorial model. She underlined the importance of the active role of the tribunal in resolving a dispute. Dr. Gessel-Kalinowska vel Kalisz whilst comparing the Prague Rules and IBA Rules on Taking evidence, underlined that Prague Rules had more inquisitorial features and the tribunal there played more active role than in the IBA`s Rules.

Doug Hall, Partner, Smith & Williamson, whilst having been invited often as expert in arbitration, shared his view on inquisitorial process and the importance of engagement of the experts upon tribunal`s motion. In addition, he spoke on cross-examination, expert witness as well as expert appointment by parties and tribunal.

The fourth session of the conference, moderated by Alexander Milner, Barrister and arbitrator, Fountain Court Chambers, was held in the new format- Blah-blah-blayka: short discussions from the floor. The conference participants were given a unique opportunity of speaking for 2 minutes on the topic suggested by a speaker.

The moderator proposed the audience touch upon the topics discussed at the conference: arbitration reform, the Prague Rules and role of expert in international arbitration.

The participants also discussed Impact of the debtor’s financial condition on the arbitration clause.

Blah-blah-blayka had a tremendous success among the participants since it gave a unique opportunity to discuss important practical aspects as well as share their practical experience.

The event finished with the reception, where all the participants were able to communicate and discuss the Conference’ sessions and raised questions regarding the arbitration sphere. 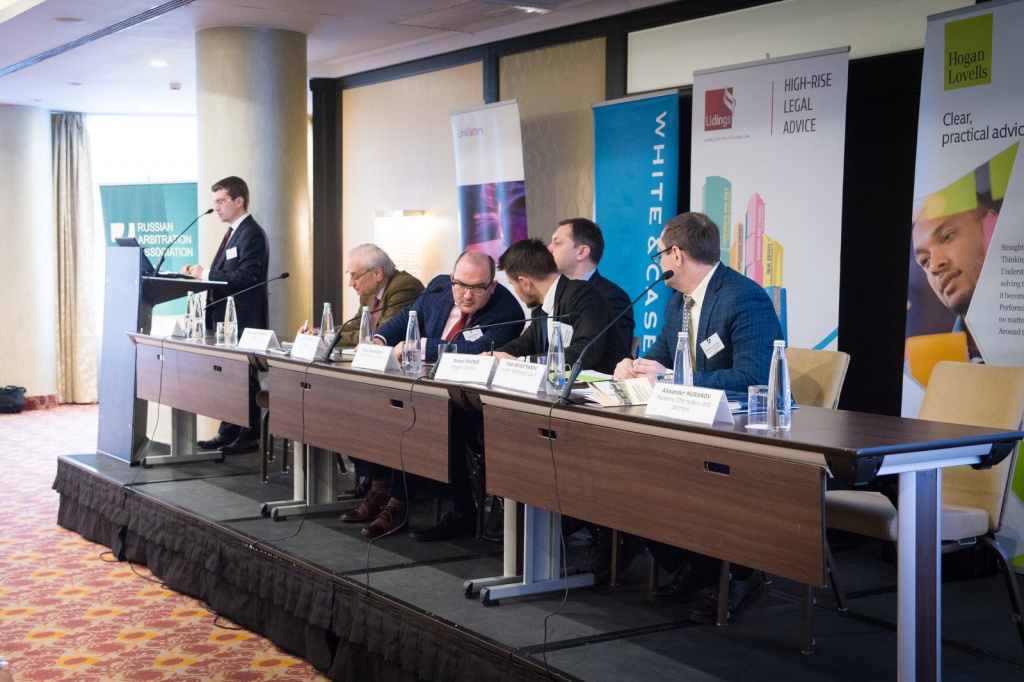 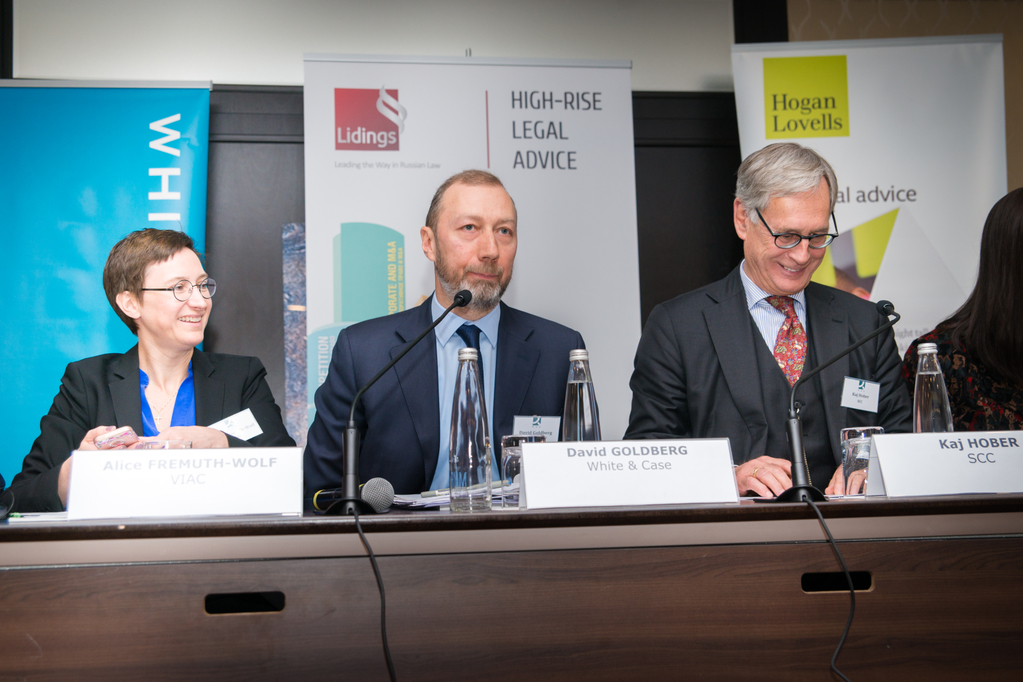 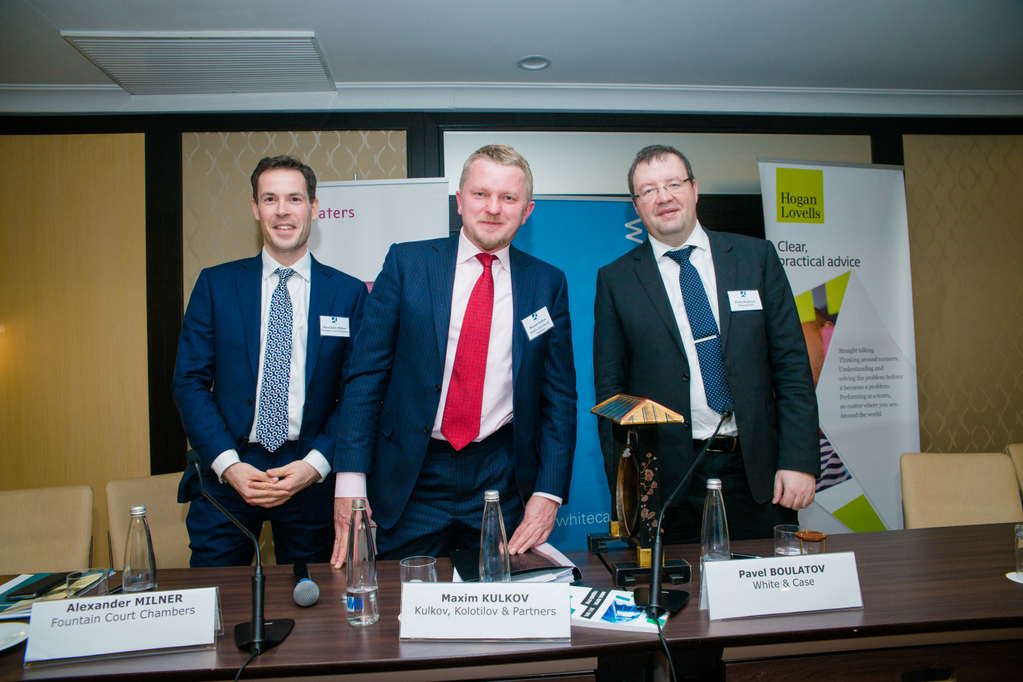 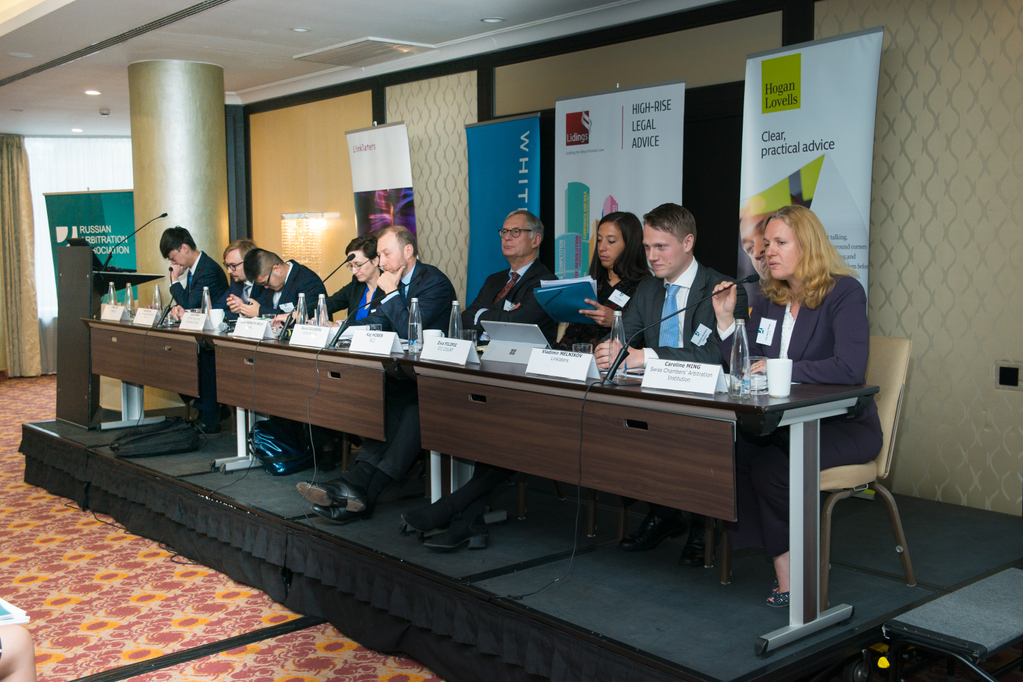 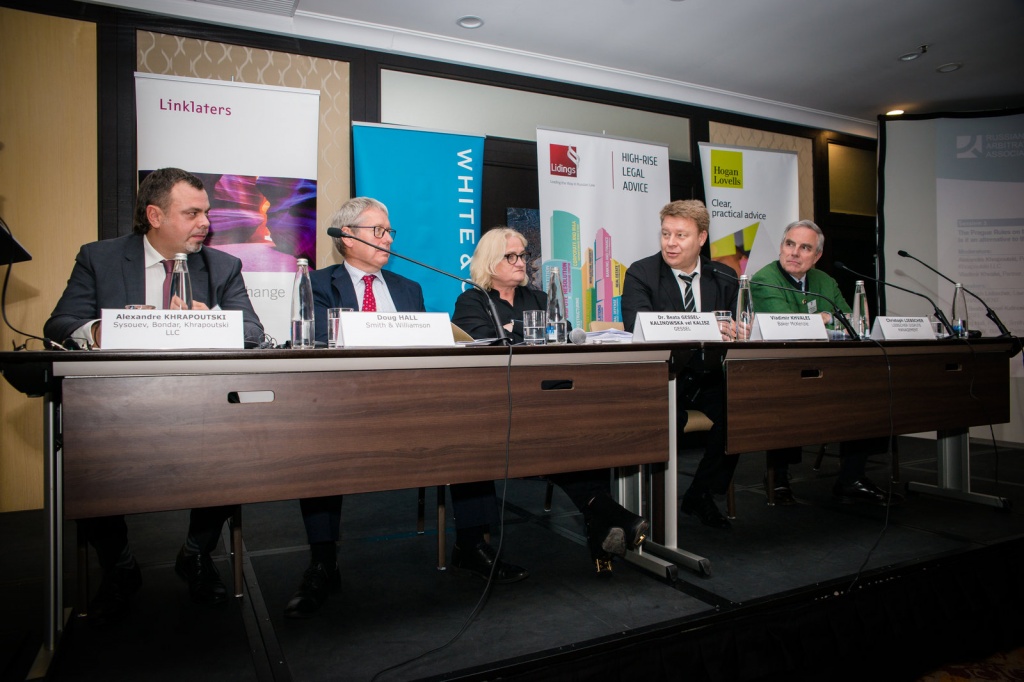 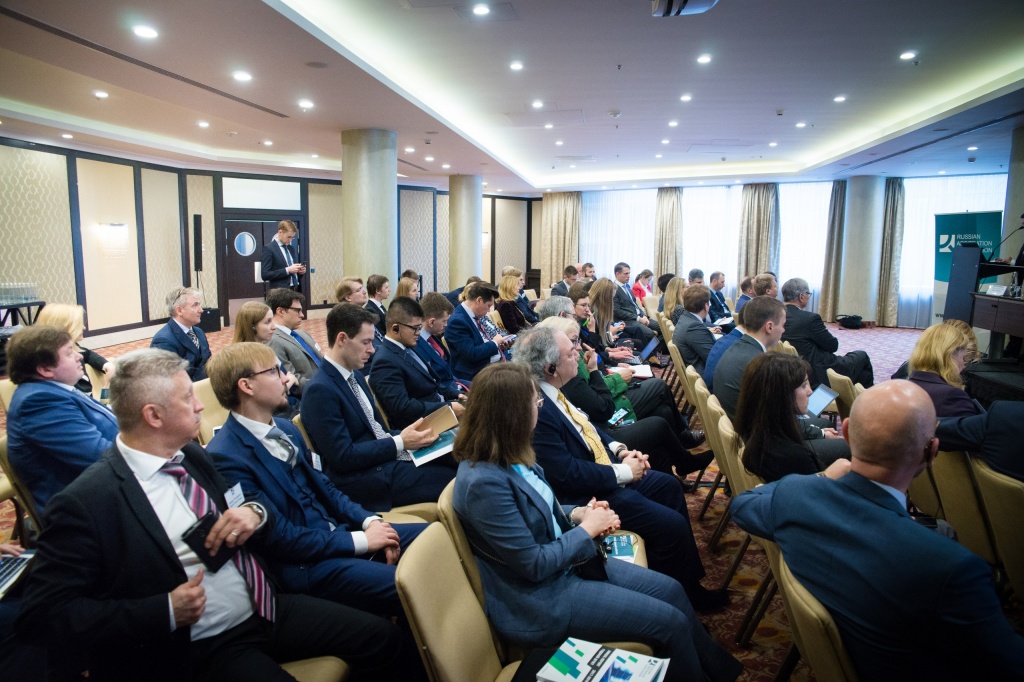