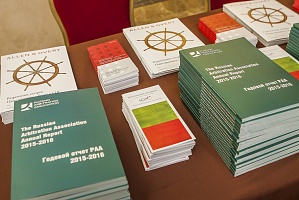 On 20th April in 2016 at Swissotel Hotel was held the 3rd Annual RAA Conference which was supported by: The law firm Clifford Chance (Platinum Sponsor), celebrating their 25th anniversary in the Russian market, such law firms as Linklaters and White & Case (Gold Sponsors), and Allen & Overy, KIAP and Smith& Williamson firms (sponsors). This conference attracted attention of the leading lawyers in the field of arbitration cases.

The first session was devoted to corporate disputes. Julia Popelysheva, Counsel in Clifford Chance, spoke about the advantages of the new law, drawing attention on the unresolved order of corporate dispute resolution before this. Julia also specified which particular disputes should be recognized as corporate, so that the condition of their arbitrability would be reached. Thereafter, she also gave a number of problems which occurred due to the adoption of the new law.

Andrey Gorlenko, Senior Associate at Debevoise & Plimpton, shared with colleagues about the types of the arbitrability of corporate disputes introduced by the new law, and about the interesting details of obtaining by a permanent arbitration institution (the new Law introduces a new acronym PAI) an authorization for carrying out activities, an adoption of particular regulations for carrying corporate dispute resolution by PAI and the obligation of PAI to notify all parties about the progress of the case on an official website.

Pavel Bulatov, Counsellor at White & Case, told about the elimination of the problem of "Russian torpedo" by the adoption of this law, so that in that time it was impossible to represent derivative suits in arbitration, which would lead the investor to the protective litigation. There was also emphasized a problem of investors trust to the Russian market after the enactment of the new law.

Ben Carroll, partner at Linklaters, spoke about shares and interests purchase and sale transactions and about the difficulties faced by the parties when arbitration agreements on the transfer of disputes to PAI were concluded.

Dr. Antonida Netzer from German Institution of Arbitration (Deutsche Institution für Schiedsgerichtsbarkeit e.V.), as a representative of the Organization the only one in the world having special rules for corporate dispute resolution, described the process of adopting those rules and the low statistics of their usage.

The second session of the conference was devoted to the registration of PAI and the compilation of a list of arbitrators who could adjudicate. Within the framework of the second session, Alexandra Usacheva, a deputy director of the Economic Law Department of the Ministry of Justice of Russian Federation, shared the information about granting of the right to exercise the functions of PAI from the parliament of the Russian Federation, as well as on the authority of the Council for the improvement of arbitration proceedings, which would be convened within two months after the enaction of the law discussed.

The Secretary-General of the RAA, Roman Zykov, called for a reference to basics to understand what would the third-party proceedings have to be like of the basis of the new law, and also to discuss what were the requirements for arbitration institutions.

Alexandr Zamaziy, a head of the Court of Arbitration attached to RSPP (Russian Union of Industrialists and Entrepreneurs), set out a number of criteria and principles to be followed by the new re-registered PAI.  These include:

o   Conformity of the rules with this Federal Law

o   The existence of a recommended list of arbitrators, whose requirements continue to be clarified, with named requirements and requirements not specified in the new Federal Law.

o   Reputation of a non-profit organization to which the Court of Arbitration is established, an appropriate scope and a nature of its activities

o   The adequacy of information about a non-profit organization and its members.

The third session was devoted entirely to an "outside point of view". The specific feature of this session was a great number of high-ranking professionals in the field of dispute resolution. The beginning of this session was interrupted by the discussion of the recent news from The Hague, where the District Court found the decision of Stockholm Arbitration, which obliged Russia to pay 50 billion dollars to the former owners of "Yukos Oil Company" two years ago, to be incompetent. Also at the beginning of the session, a minute of silence was declared in remembrance of Professor Lebedev, one of the founding father of national arbitral proceedings.

Dr Jacomijn van Haersolte-van Hof, LCIA Director General, told about an extremely large number of disputes with Russian parties involved within the walls of LCIA, and about the strategies that the London Centre could elect to the Russian parties. When it comes to the development of special rules, the London Centre doubted whether it would be able to make concessions. This is mainly connected with the fact that the principle of confidentiality will be violated when the executions of decisions were to be held in Russia, and LCIA cannot make its clients lose the confidentiality.

Annette Magnusson, a Secretary General of the Arbitration Institute of the Stockholm Chamber of Commerce, answered that despite different legal regimes, there were similar tendencies and similar problems in Sweden. Since sometimes the number of Russian suits (legal disputes involving Russian parties) in Swedish arbitration exceeds the number of disputes with parties from the rest of the countries, it also compelled the Arbitration Institute to discuss the new law and most likely to apply for authorization from the Russian Government.

Mr. Kazuki Shishido. Deputy Secretary General at Japan Association of Arbitrators, presented a Japanese view on the new law and expressed the hope that the Japanese-Russian relations would continue to be equally effective, he also surprised the participants of the Conference by a goodwill to engage in a dialogue in the nearest future, and even possibly to develop rules on corporate dispute resolution

Dr. Philipp Habegger, a Chairman Swiss Chambers' arbitration institution, told about Swiss practice and a goodwill to monitor the development of the new Russian Legislature and its practice, which would appear very soon after its adoption. He noted that there should be very good rules on corporate disputes, and it would be very interesting to see what would the reform of the arbitral proceedings in Russia would lead to

At the end, Roman Zykov presented an advertisement video with the participation of the "stars" of Russian commercial arbitration. The advertisement was dedicated to the recently launched project of RAA - Online Arbitration.