The Role of RAA in Developing Arbitration in Russia 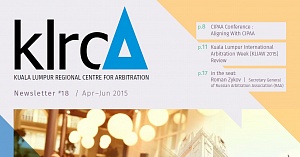 In The Seat: Roman Zykov

1. The Russian Arbitration Association (RAA) was founded in April 2013. How did it come into existence?

Historically, Russia has always been one of the central actors in international arbitration, starting from the Hague Peace Conference of 1899 which was convened at the initiative of the Russian monarch Nicholas II. The outcome of the Conference was the Convention on the Pacific Settlement of International Disputes, which provided for settlement of international disputes by arbitration, which later was institutionalized in form of the Permanent Court of Arbitration in the Hague (The Netherlands).

After the dissolution of the USSR, Russian companies became more free to decide on how and where to arbitrate, and as a result Russian arbitration geography expanded dramatically, and now embraces London, Paris, Genève, Vienna, Kuala Lumpur, Dubai, Singapore, Hong Kong and other.

In fact, most of the complex and high stake Russia-related disputes are resolved outside of Russia today, which raises reasonable concerns as to the future for arbitration in Russia itself. Therefore, development of the arbitration capabilities and legal market in Russia was the main objective when we created the Russian Arbitration Association. Initially, a group of about 50 international and domestic law firms took part in the founding conference in 2013. Since then, each April, the Russian Arbitration Association holds its annual conference and members’ meeting.

2. Clearly it is still early days, but how would you say the development of arbitration in Russia and the CIS (Commonwealth of Independent States) countries has been in the past 12 months since the RAA was formed?

Indeed, just two years have passes since the creation of the RAA and I must admit that we achieved quite a lot. The RAA has launched its UNCITRAL based Arbitration Rules and the court, the online arbitrators’ database, we take an active role in the development of the new domestic arbitration law, we implemented the Code of Best Practices in arbitration and also launched the RAA online arbitration platform for the resolving of small claims via the internet. Given the vast Russian territory, we hope to accommodate the needs of the companies across the continent. We organize meetings, conferences and trainings for in-house counsel of leading domestic and international companies, practicing lawyers and students in order to promote the concept of arbitration in Russia.

The RAA has already received international recognition, and increased its membership base to over a 100 law firms globally. It is important to say that the RAA is an NGO financed from the annual members’ fees and receives no financial support from the state, making it truly independent.

In a short-term perspective, the RAA focuses on consolidating the arbitration market within the CIS and endeavours to become a preferred venue for resolution of the intra-CIS disputes. For achieving that, we are introducing IT innovations to the dispute resolution for maximum efficiency and flexibility and generally are focusing on .

3. Beyond the Russian and the CIS’ (Commonwealth of Independent States) markets, will the RAA be expanding its presence into foreign markets in the near future?

Yes, in a long run we will work on developing expertise for administering international disputes. However, currently the domestic market presents great opportunities with almost no competition, which makes us focus on Russia and CIS almost exclusively.

4. The RAA and KLRCA have just signed a collaboration agreement. What does this signify for both parties?

In the last two decades, arbitration market has grown exponentially. Because currently the market is largely divided between a number of traditional arbitration centres it is important for the rising centres to join efforts in developing regional cooperation in the marketing, exchange of information, education, local legal and administrative support. Cooperation will facilitate the exchange of ideas. I am certain that we can learn from each other and eventually can increase the competitiveness of our centres regionally and internationally.

One of the fields for cooperation, in my view, could be the exchange of information on potential arbitrators. In 2014 the RAA launched its online arbitrators’ database which is used by the parties and other arbitration centres to assist them in their search for a suitable candidate. At the same time, we see that the KLRCA arbitrators’ database has a 700 arbitrators strong database, and understand that we have a long road ahead of us.

5. What are your views on the Malaysian arbitration scene in general? Bilateral trade between Russia and Malaysia recently hit the USD 2 billion mark. With that figure set to rise, the importance of arbitration clauses being inserted into contracts will similarly rise in tandem. Malaysia has not imposed sanctions on Russia, thereby reducing the risk of infringing sanctions regulations. Against this backdrop, would it be fair to say that the KLRCA offers a ready-made viable alternate option for Russian entities and parties to consider arbitrating their disputes at?

Malaysian arbitration scene is somewhat unknown to the Russian legal practitioners and I believe that Malaysian lawyers’ knowledge on Russia is also quite limited. Therefore, education of both communities is necessary for building trust and understanding. I hope our arbitration centres will play a pivotal role in this process.

As you correctly pointed out, the bilateral trade between our countries has reached a historically high benchmark and continues to grow with potentials touching up to US 100 billion, as the economists predict. Malaysia is Russia’s one of the key trade partners in the Southeast Asia. We cooperate in a number areas stretching from defence, air space, education, trade and infrastructure projects to tourism. This, in my view, opens exciting opportunities for our arbitration centres and legal practitioners from both countries.

Speaking of the anti-Russian sanctions, they may have a positive effect on the workload of the Asian arbitration centres, including KLRCA. However, the sanctions alone may not bring Russian cases to Asia, unless there is trust built over time.

By way of example, I drafted an arbitration clause recently and a legal counsel of a Russian public company suggested that it preferably be London because, as she explained, this is what they traditionally use. I fully understand her – it is not easy to deviate from something that has worked reasonably well for your company so far (even though it was not the most obvious venue and applicable law choice in that particular case). Therefore, trust is key.

At the same time, there is information that some of the pending arbitrations involving sanctioned Russian companies and persons are delayed, in some instances arbitrators simply refuse to accept appointments, international law firms avoid acting as counsel and banks do not facilitate payments of arbitration fees. In most cases these processes lack transparency and are not openly discussed by the service providers. In the absence of firm assurances coming from the governments and arbitration centres that in no circumstances Russian companies will be denied access to justice, any reasonable corporate counsel should carefully evaluate imminent risks while selecting an arbitration venue.

I also hear increasing concerns, especially from the civil law lawyers, about arbitration largely shifting towards Anglo-Saxon tradition and global market domination by a relatively small number of institutions, law firms and arbitrators. In my opinion, this is not necessarily a bad thing as such. Trust is key, as I said. At the same time, we see that some of the modern regional institutions already can offer compatible services for less price. However, because most of them remain unknown to the Russian market at large and have not yet earned reputation, it may take some time before Asian arbitration centres secure a portion of Russian cases. So, this is certainly something worth working on.

I am a strong believer that the rise of the new regional arbitration venues serves a greater global purpose, simply because no one else can convey an idea of modern style arbitration to the local users. In turn, this increases the capacity of the global arbitration market by engaging the parts of the world not yet familiar with high quality arbitration.