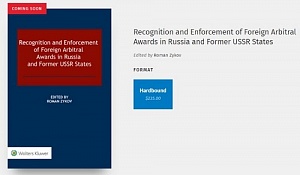 The 15 sovereign states that emerged from the dissolution of the Union of Soviet Socialist Republics (USSR) in 1991, having all adopted the New York Convention on the Recognition and Enforcement of Foreign Arbitral Awards, today are drawing increasing attention from international law firms and global arbitral institutions. This book, compiled under the editorship of the Secretary General of the Russian Arbitration Association, is the first full-scale commentary in English on the application of the New York Convention in Russia and the other 14 former USSR states, with attention also to the various relevant national laws and procedures.

A total of 71 contributors, all leading experts on arbitration and litigation in the covered jurisdictions, provide in-depth research encompassing the following approaches:

∙ article-by-article commentary on the New York Convention with emphasis on the practice of Russian state commercial (arbitrazh) courts;

∙ commentary on the relevant provisions of the Russian International Commercial Arbitration Law and the Code of Commercial Procedure;

∙ analysis of law and practice on setting aside, recognition, and enforcement of arbitral awards in all non-Russian former USSR states, state by state, written by experts in each jurisdiction; and

With this detailed information, practitioners will be able to understand how judicial developments in the covered jurisdictions have impacted the enforceability of arbitral awards, and how parties can take steps to ensure that they secure enforceable awards. In addition, they will clearly discern the enforcement track record for arbitral awards in Russia and former USSR states and how each jurisdiction treats enforcement applications, greatly clarifying decisions on choices by parties and determination of seat of arbitration.

Because this book makes arbitration law and procedure in Russia and the former USSR states accessible for the first time in English – thus assisting evaluation of prospects of enforcing foreign arbitral awards in that part of the world – it will be warmly welcomed by in-house counsel,