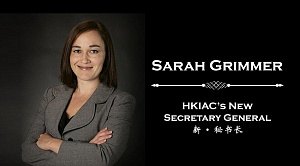 Sarah Grimmer was appointed Secretary General of HKIAC on 1 September 2016.

Sarah most recently served as Senior Legal Counsel at the Permanent Court of Arbitration (PCA), which she joined in 2006. She has acted as registrar in three inter-State arbitrations under the United Nations Law of the Sea Convention and has been appointed tribunal secretary in multiple investor-State arbitrations and contract-based disputes. Sarah has extensive experience in appointing authority matters under the UNCITRAL Arbitration Rules 1976 and 2010 and other rules. Between 2002 and 2006, she was based in Paris, serving as Assistant Counsel at the ICC International Court of Arbitration and in the International Arbitration Group of Shearman & Sterling LLP.  Sarah began her legal career in private practice in New Zealand in 1999. She is a graduate of Victoria University of Wellington and the University of Cambridge.

Thank you very much, Ms Grimmer, for finding the time to meet during the IBA Annual Conference. For our audience it is very interesting to know more about you and your plans regarding HKIAC. I think that your career is really outstanding. You have worked with so many famous arbitrators. This is why I would like to ask you one of my favorite questions. What in your opinion are skills of a good arbitrator and what makes a good arbitrator a great one?

A good arbitrator is many things. He or she is capable of understanding the procedural and substantive issues at play in a case, and careful to ensure that he or she has the time to really know the case, including its procedural needs, the precise nature of the contentious factual and legal issues, the narratives of both sides, as well as the bird’s eye view. A good arbitrator is responsive to the parties, analyses the issues dispassionately, is well-prepared for hearings and deliberations, and carves out time for drafting. One of the key ingredients to running an arbitration well is having time to give it the attention it needs.

I like this definition. Do you think there are not so many people who can do this every single time?

There are a good number of great arbitrators who master what they do every single time. I think there are, however, many talented individuals who are “victims” of their own success. They are so good that they are regularly called upon by parties, arbitral institutions, and other organisations to act as arbitrator, advise parties, speak or contribute in one way or another, that they become over-committed. I think the greatest struggle for many successful arbitrators is safeguarding their time.

It depends on the person. Institutions are conscious of the need to identify excellent young people from different jurisdictions who are suitable for arbitral appointments. It is in the arbitration community’s interest to develop the next generation of professionals. The benefit of institutionally administered cases is that the institution is privy to the young arbitrator’s work and can provide any necessary guidance with respect to procedural issues under the applicable rules, for example. Young arbitrators are cognizant of the fact that their performance as arbitrator in their first arbitrations is so important, because it is in these cases that they prove their ability and establish their reputations. If they do a good job, they will be appointed again; if they do not, they will not be.

I assume that HKIAC also tries to involve young arbitrators more and more. Am I right?

Yes. In Hong Kong there is a group called HK45 which is comprised of young practitioners who meet regularly, discuss issues, organize events, and generally display a lot of engagement, creativity, and energy. It is a very good pool of professionals. Also HKIAC runs the tribunal secretary accreditation program which provides a way for young people to learn about the role of a tribunal secretary in arbitral proceedings. From within HKIAC we appoint legal counsel to act as secretaries for tribunals. Acting as tribunal secretary involves administrative support beyond case administration under institutional rules. It allows people to work closely with tribunals and provide to them invaluable administrative support.

Let’s return back to your career. Could you please share what inspired you to take this job in HKIAC?

When I learned about the HKIAC position, I did my investigations which first meant looking at the leadership of HKIAC, which is excellent: Teresa Cheng, Matthew Gearing, Henry Alvarez, Peter Goldsmith, to name a few of its Council Members; all of whom are eminent figures in the arbitration world. I looked into the community in Hong Kong and learned how supportive, smart, and engaged it is. Also, being from New Zealand, Hong Kong is half-way home to my family. Then there is Hong Kong itself. In the heart of Asia. It seemed to me a perfect opportunity both in terms of my profession but also so that I can explore this amazing part of the world. So I said yes.

I had loved my life in the Netherlands and my work at the Permanent Court of Arbitration (which is a truly special place) and had built long friendships with incredible people. It is always hard to leave a good life like that. But sometimes, even though it is hard, you have to go.

How do you see your role and mission here, in HKIAC?

My first job is to make sure that the Centre continues to provide excellent service. The house must be in good order. It already is. I have worked in institutions for many years and I am confident that this side of things will be fine. HKIAC’s staff is excellent. My mission is then to identify the next chapter for the Centre. I have some ideas. Soon I will meet with Council Members to lay out areas for HKIAC’s development over 2017 and beyond.

What makes my job easier is that HKIAC’s Administered Arbitration Rules are excellent. They provide answers to complicated procedural issues like consolidation, joinder, and commencing a single arbitration under multiple instruments. That the answers are in the Rules means that the parties do not have to spend time and money arguing procedural issues. The possibility of appointing emergency arbitrators and applying for expedited proceedings is also an important draw-card; the latter being particularly popular among users. Hong Kong is also an excellent seat and the courts are independent. So the basis for my future plans is strong here.

One thing that is certain is that I want HKIAC to be an institution that services all types of arbitrations. In Asia we see a number of investor-State arbitrations. We see Asian states as respondents and Asian companies as investors. While investor-State arbitration does not involve Asian parties as frequently as parties from other regions, such cases do exist in not insignificant numbers. I see no reason why such cases cannot be administered by HKIAC. We have the staff and the facilities. According to a GAR survey last year our hearing facilities were ranked best in the world (they are beautiful; the view over Victoria harbor from the 38th floor is incredible). In terms of administration, we have the staff and the skills (legal, language etc). I have many years of experience administering investor-State arbitrations. I have acted as a tribunal secretary to numerous investor-State tribunals and registrar in inter-State cases

I remember I saw statistics of HKIAC in accordance with which almost all requests for expedited proceedings and consolidation are granted. This is really impressive.

Many of the applications received for expedited proceedings were granted although a few were not. Those were well-considered decisions. We have a Proceedings Committee that carefully considers these applications.

Do you have any specific plans with regard to Russian parties?

Absolutely. I think this is an important time to strengthen ties and to spend time in Russia talking to people about what we can offer. There is much talk about a pivot by Russian parties away from European-based dispute resolution options because of UN sanctions. One of HKIAC’s most senior counsel has recently visited Moscow to speak at a conference and meet in-house counsel and some companies. He reports that there was significant interest in HKIAC as an option.

I think it is crucial for counsel to maintain credibility as lawyers. Lawyers should be at the service of tribunals. Lawyers who are prepared to take on difficult points and guide the tribunal through them gain respect. By contrast, counsel who do not play straight with the facts or legal authorities or who do not grapple with the hard questions, do not serve the tribunal. The tribunal must at some point deal with the difficult issues so it behooves counsel to be helpful on a point, not silent, or worse, obfuscatory. Imagine a submission containing a reference to an exhibit. In an award drafting phase or deliberations phase the tribunal looks to the exhibit and finds it does not state precisely what was alleged in the submission. This is at best disappointing. It makes the work of the tribunal much harder because the tribunal cannot trust counsel’s submissions at face value. A lawyer’s integrity is really important.

What in your opinion is a future of arbitration in 10-20 years?

I think that the system will become more and more sophisticated and multifarious. For the last five years we have seen strong criticisms of investor-State dispute settlement by arbitration. Some criticisms are based on misinformation or ignorance. I think that many participants in arbitration are dedicated to making sure that the system is one that is useful and effective for international trade, investment, and development. International disputes will not end so we need to devise dispute settlement mechanisms that work for parties. We may need multiple options, e.g., arbitration, standing courts (commercial and investment), appeal mechanisms, mediation, arbitration/mediation combined proceedings, non-binding review panels, expert determinations, fact-finding commissions etc. In my opinion there is a lot about investor-State arbitration that works. It is a mature system. It can certainly be improved, but States may wish to avoid throwing the baby out with the bath water. Establishing an investment court, for example, will present its own very difficult challenges. At the time the PCA was being established in 1899 there were efforts to set up a fixed court, but there was so much political disaccord around constituting the bench that the project could not proceed. While the seeds for the ICJ were planted in those early days it only became a reality much later.

Some think that investor-State arbitration has no future. I don’t agree. We see caseloads at ICSID, PCA, and SCC increase year on year. The network of multilateral and bilateral investment treaties is vast. Rather than step out of the system entirely, States are starting to take control and modify their treaties. Model treaties are being more carefully drafted which will make tribunals’ work easier (touch wood). All this is going in the right direction. Also, there have been significant movements towards transparency, quite apart from which, awards emanating from confidential proceedings sometimes make their way into the public domain. With more transparency comes more accountability, more knowledge sharing.

I think that arbitration is going to become more and more sophisticated. The New York Convention is being implemented well widely. Judiciaries around the world are learning more and more. In general, the arbitration community writes and talks a lot about the issues its faces. There are so many dynamic minds focused on arbitration that I do not see how it cannot but continue to improve.

Thank you, I have the final question for you. During this IBA conference there were a lot of discussions about artificial intelligence. Do you think robots can substitute arbitrators one day?

You would need to have a very special robot!

Thank you very much for your time and interesting observations!