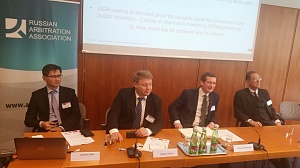 On 07 April 2017, the Russian Arbitration Association (“RAA”) and the Vienna International Arbitral Centre (“VIAC”) organized a conference on “Dispute Resolution in Russia – legislature, trends and implications for doing business” at the premises of VIAC. The conference provided participants with valuable information on the most recent changes to Russian legislature with regard to arbitration and their impact thereon.

The conference was opened by a speech held by Alexander Potemkin, Trade Representative of the Russian Federation in Austria, on behalf of Dmitriy Lubinskiy, Ambassador Extraordinary and Plenipotentiary of the Russian Federation in the Republic of Austria, who unfortunately could not be present at the conference. In his statement, Dmitriy Lubinskiy praised Vienna as the center of Europe and urged everybody to promote cooperation. Engaging into and maintaining dialogue instead of isolation is nowadays more important than ever before, given the current difficult political situation, according to Dmitriy Lubinskiy.

Vienna as the Place of Arbitration for Parties from CIS Countries

The opening speech was followed by Manfred Heider’s, Secretary General of VIAC, who delivered insight into Vienna being an important place of arbitration for parties from CIS countries. Data for 2016 demonstrate that Vienna is increasingly being preferred as place for arbitration in Eastern Europe. Cases in connection with parties from CIS countries have increased in 2016 amounting to 60, with an aggregated amount in dispute of approx. EUR 1.5bn. Moreover, the biggest mediation proceedings VIAC administered under the newly concluded Mediation Rules 2016 involved a Russian party, too.

Subsequently, Manfred Heider shared his experience by providing interesting insight into issues he was faced with – and generally one might be faced with – in arbitration involving parties from Russia. One of such “characteristics” is the basis for disputes being formed by bilingual contracts, i.e. Russian/English or Russian/German. This might not yet be unusual per se but problems arose as languages deviated and there was a lack of clarity regarding which version had to be regarded as the authentic one. Arbitral tribunals thus might face the difficult task of establishing which language prevails. Uncertainties further tend to arise from a dispute resolution clause, which sometimes imprecisely refers to a settlement of the dispute at “arbitrage courts” (in Russian: „Арбитражный суд”) in Vienna. One could reasonably argue that under such notion Vienna’s commercial courts are to be understood, not necessarily arbitral tribunals. Thus, difficulties exist as to establishing the appropriate dispute resolution forum. Subsequently, Manfred Heider mentioned the specifics of “hybrid” arbitral agreements, e.g. providing for ICC Rules or UNCITRAL Rules as applicable arbitration rules but administration by VIAC. Manfred Heider confirmed that VIAC had accepted to administer such proceeding but – rightly und understandably – pointed out that such scenario is far from ideal. Finally, it is rather common that the amounts in disputes involving Russian party/ies are rather high.

The Right to be Heard under Austrian Arbitration Law – An Empty Threat?

Following Manfred Heider’s presentation, Stefan Riegler (Baker McKenzie Diwok Hermann Petsche, Vienna) held a presentation demonstrating the most important aspects under Austrian law of the right to be heard. Despite a violation thereof very often being alleged in the course of arbitral proceedings, the actual number of successful challenges of arbitral awards based on such grounds is very low: In the last 25 years only 2 decisions by the Austrian Supreme Court were rendered having set aside arbitral awards due to a violation of the right to be heard. The reason for such low number is certainly the Austrian Supreme Court’s very restrictive approach. It considers the right to be heard only to be violated if such right had not been granted at all. Regardless, there can be no dispute that the right to be heard remains one of the fundamental principles to be obeyed when conducting arbitral proceedings.

Subsequently, Stefan Riegler initiated a discussion on whether it should be a requirement to object to procedural decisions by the arbitral tribunal in order to be entitled to initiate subsequent setting aside proceedings, or whether a lack of objection should constitute a waiver.[i] No agreement could be found thereon. One side argued that the right to be heard is part of ordre public and as such no obligation should be required, also taking into consideration that parties might refrain from such objection in pending proceedings not to upset the arbitral tribunal. On the other side reference was made to issues of efficiency and good faith, arguing that arbitral tribunals should be granted the possibility to cure such defects and parties should not remain silent throughout the proceedings despite feeling unfairly treated but challenge an arbitral award once rendered based on such grounds. The lack of agreement between the two sides initiated a very interesting discussion.

Improving the Quality of Arbitration in Russia

After Stefan Riegler’s excursus, the topics discussed returned to dispute resolution in Russia. Presentations held by Vladimir Khvalei, Chairman of RAA, Alexander Bezborodov (Beiten Burkhardt, Moscow) and Leng Sun Chan (Baker McKenzie Wong & Leow, Singapore), demonstrated that one has to be cautious with dismissing recent reforms as contra-arbitration. As explained by Alexander Bezborodov, the reform in Russia had three main objectives: (i) to combat bad faith-participants in the Russian legal market, (ii) to improve the quality of arbitration in the Russia and (iii) to return disputes thereto. Thus, it is fair to say that instead of fighting arbitration, arbitration should rather be promoted by ensuring that it would no longer be misused and abused. To achieve this, several aspects have to be considered, of which the most important ones were discussed in the course of the conference.

The arbitration agreement has to be in writing. Such requirement is complied with inter alia when such agreement is concluded in a form enabling the information contained therein to be recorded or to be available for subsequent use.

Further, changes have occurred with regard to the arbitrability of corporate disputes. In essence, such disputes can be divided into 3 categories: (a) non-arbitrable and (b) arbitrable, the latter subject to (i) two or (ii) three conditions in addition thereto. Practically speaking, category (b)(i) involves shareholders’ agreements. Such disputes require that the respective arbitration agreements were entered into on or after 01 February 2017 and the arbitral proceedings are administered by an arbitration institution, i.e. no ad hocarbitration. Such institution must have obtained a license to administer arbitral proceedings in Russia (see below). Share purchase agreements will fall into the category (b)(ii), thus further requirements have to be met, namely that the place of arbitration has to be Russia, such disputes are to be resolved under special rules and are subject to an arbitration agreement between the legal entity itself, all shareholders/participants and other parties who are to be claimants/defendants. Making (certain) corporate disputes arbitrable, even if subject to some strict requirements, is certainly to be welcomed.

Importantly, Manfred Heider confirmed that VIAC will apply for such license.

Due to the relevance and significance of the reforms in arbitration, transitional provisions have also been concluded. The failure of arbitration agreements entered into before 01 September 2016 to comply with the new requirements does not automatically lead to their invalidity, unless, however, such consequence are expressly provided for. Importantly, such is the case as regards corporate disputes.

Further information on the conference, its speakers and conference materials can be found on the homepage of the Russian Arbitration Association: http://bit.ly/DispRes_Rus.

The post was first published on the SLOVAK ARBITRATION BLOG