Annual IBA "Mergers and Acquisitions in Russia and CIS" Conference 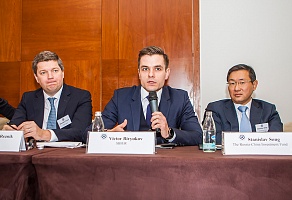 The 8th annual conference of the International Bar Association (IBA) devoted to mergers and acquisitions in Russia and in the CIS-member countries was held in the hall Ararat Park Hyatt on October 18, 2016.

• Macroeconomic trends in the sphere of mergers and acquisitions;

• Development of corporate law: lessons learned and next steps

• Pressing questions of transactions on mergers and acquisitions: opinions of heads of legal departments, legal advisers, and investment bankers;

• Public transactions on mergers and absorptions: provisions on voluntary and obligatory offers to acquire shares in Russia, Great Britain, and in the European Union;

• Reform of arbitration in Russia and transactions on mergers and absorptions.

The Conference was organized by the IBA Committee for Corporate Law and Mergers and Acquisitions and the IBA European Regional Forum, supported by the Federal Chamber of Lawyers and the Saint Petersburg Chamber of Lawyers. The Russian Arbitration Association acted as a coordinator of the event.

The conference began with welcome addresses from Mr. Christian Herbst - Co-Chairman of the IBA Committee for Corporate Law and Mergers and Acquisitions, partner of Schoenherr legal firm, and Mr. Vassiliy Rudomino - member of the Council of the IBA Division for Mattes of Legal Profession, senior partner of ALRUD legal firm. In his opening speech, Mr. Vassiliy Rudomino noted a growth in the number of participants and characterized it as the best conference devoted to M&A transactions, since law firms developed the program and invited the speakers themselves.

In the beginning of the first session, Mr. Dmitriy Sedov, Co-Head of Goldman Sachs for Russia and CIS, and co-head of the investment and bank branch, presented in brief main macroeconomic parameters in the M&A market in the global outlook and in respect to Russia. So, his main theses were: disruption and slowdown of the world market, reduced presence of western partners in Russia. Mr. Victor Biryukov, Head of the SIBUR M&A Projects Support Department, spoke on development of his company, familiarized the participants with some most important transactions on the example of which he noted the importance of M&A for SIBUR. Mr. Stanislav Song, Director of the Russian-Chinese Investment Fund, presented to his colleagues actual data on cooperation of Russia with eastern partners. The last 2 years showed improvement of interrelations between them. Mr. Vladimir Tatarchuk, Chairman of the Board of Directors of Proxima, shared his experience of dealing with distressed assets in the market. The last of speakers was Mr. Alexander Reznik, Executive Director of the Department for Investing and Banking Activity in the global markets of VTB Capital CJSC, who visually demonstrated on a slide-deck how key drivers of activity of the market of mergers and acquisitions had been realized in practice the last year.

The second session was devoted to development of corporate law. The moderators of the session - Mr. Andrei Dontsov, partner of White&Case, and Mr. Dmitriy Stepanov, partner of EPAM, proposed the working structure of the panel session, beginning with application of the newest corporate law through preparation of corrections to future tendencies of the industry development. Mr. Ivan Podbereznyak, Director of the Department for Corporate Affairs of Polus PJSC, in general positively assessed the innovations introduced by the latest reforms; nevertheless, he considered that appearance of more distinct judicial practice is necessary. Mr. Artyom Karapetov, Director of the Legal Institute "M-Logos", analyzed in considerable detail the new contractual designs: options, negotiation agreements, payments for withdrawal from an agreement, representations on circumstances, and compensation of losses. Mr. Pavel Filimoshin, adviser to the Economic Department for Admission to Financial Market of the Central Bank of Russia, presented a range of initiatives planned by the Bank of Russia, having also noticed that participants of the market call for stability, instead of changes which one should yet become used to. In the end of the session, Mr. Anatoliy Andriyash, partner, co-head of the Moscow Office of Norton Rose Fulbright, told his colleagues about the innovations regarding voting by quasi-treasury shares.

The moderators of the third session - Mr. Rabbe Sitnikov, partner of Hannes Snellman Attorneys Ltd, and Mr. Alexander Zharskiy, partner of ALRUD legal firm - noted the diversity of the structure of speakers and asked them to give the benefit of their experience in entering into transactions on mergers and acquisitions in their fields of activity. Mr. Roman Kvitko, Director of the Management for Legal Affairs of Gazprom neft OJSC, spoke first and told his colleagues how the M&A market in the oil production industry had changed. The key theses of Mr. Ivan Litvintsev, Managing Director of UFG Asset Management, were that in Russia there had been the problem of absence of "long-term money", as well as that foreign players in the market had left it, however the remaining funds attached to banks continued to be successful. Mr. Henrik Lonberg Rossing, lawyer, partner of Plesner, introduced the problem of "broken deals" and explained why they took place. Mr. Maxim Uryash, Executive Director of Advance Capital, told about the difference in evaluation of prices by a buyer and a seller when entering into M&A transactions, and why such difference took place. Mr. Grigoriy Gadzhiyev, partner of Linklaters, having listened to his colleagues, agreed that his practice also reflected main tendencies in the market of M&A transactions, which included changes in market geography. In the conclusion of the 3rd session, Mr. Armand Berdalin, partner of Sayat Zholshy&Partners, told about his experience in structuring M&A transactions in Kazakhstan, and presented a comparative study of the market of countries of Central Asia.

The 4th session was devoted to public offering in the existing laws of Russia and to amendments proposed thereto, as well as to similar questions in Great Britain, Germany, and in the United States of America. Its moderators were: Mr. Alan Kartashkin, partner of Debevoise and Plimpton LLP Russia, and Mr. David Stewart, partner of Latham and Watkins; the latter presented the English model of public offering. Mr. Andrew J. Nussbaum, partner of Wachtell, Lipton, Rosen and Katz, told his colleagues how public transactions on M&A were entered into in the USA. In his opinion, the American system considerably differs from all other. What cannot be said about the German model presented by Mr. Adrian Bingel, partner of Gleiss Lutz, who noted that the German and Russian models had many similarities. Mr. Alexander Smirnov, Director for Legal Affairs of the Moscow Stock Exchange, noted importance of the topic of public offering, as well as the moderators' intuition in choosing the topic for the conference in view of the amendments proposed recently. During the session, the speakers were presented a range of cases which each of them solved through the prism of their laws. So, the Russian peculiarities were presented by Ms. Marianna Zakharova, First Vice-President - Head of the Block of Corporate, Joint-Stock and Legal Affairs of Nornikel, and Ms. Olga Khudokormova, Vice-President for Legal Work and Corporate Finance of Independent Oil and Gas Company JSC.

The final session was devoted to the reform of arbitration with reference to transactions on mergers and acquisitions. The moderators at this session were: Mr. Andrei Gorodisskiy, managing partner of Lawyer Andrei Gorodissky & Partners, who highly appreciated the innovations, and considered that a fundamental and conceptual basis of arbitration had been constructed in Russia, and Mr. Jonathan Heins, partner of Morgan Lewis. Mr. Alexander Tarabrin, Chief of the Legal Department of "Otrkrytiye" financial group, presented a slide deck on the topic of arbitrability of corporate disputes according to the new laws. Mr. Anton Asoskov, Professor of the Civil Law Department of the Faculty of Law of the Moscow State University named after M.V. Lomonosov, told which arbitration institutions will be able to consider corporate disputes, and variants how participants of a dispute could express their consent to settlement of a dispute in arbitration. Mr. Andrei Gorlenko, General Director of "Institute of modern arbitration" ANO, and Mr. Alexei Yadykin, Senior Lawyer of practice in regard to dispute settlement, Freshfields Bruckhaus Deringer LLP, shared with his colleagues how an arbitration clause should be drafted correctly. Mr. Yuriy Monastyrskiy, partner of Monastyrskiy, Zyuba, Stepanov & Partners, told on awarding losses in arbitration. Mr. Roman Khodykin, partner of practice in regard to international arbitration and dispute settlement of Goltsblat BLP, told what foreign institutions did to meet the new requirements.